skip to main | skip to sidebar

Walsall Canal, A CanalScape-BCN inspection cruise with Dean Davies from BW aboard.

The 21st of May saw 109 leave Walsall town wharf at 11.45AM, our destination was Birmingham.

Immediately entering the Pleck area the vast amount of household waste dumped in bin liners started to amaze us, it was next best to boating through a cess pit. Not only was this just rubbish, but also food waste deposited over walls, over bridges and even over the back wall of a mosque.
Worrying too was the sighting of 5 dead dogs in a short stretch as we headed towards James Bridge, the dog sizes would be a possible by product of dog fighting. Such were my concerns on this stretch that post the cruise I have made the knowledge of our finds available to Walsall council who are going to monitor this area and if necessary investigate the rubbish contents. Going down the weedhatch here was very unpleasant.

We continued onto Spinks bridge alongside the former copper works site, here we grounded and were halted for some 40 minutes on solid concrete laying in the bridgehole. Although we called the “hit squad” we managed to free ourselves and they stood down, this bridge must be cleared of debris for safe passage.

Darlaston and the environs through much more rubbish at us, numerous prop clearances and trips into the hatch. Whatever cleanups have achieved here in the recent past, nothings now shows any change. Moxley was a bumpy ride, again with much debris, however we managed a act of rescue at Moorcroft, where we untangled a duck from fishing line (see picture).

The depressing trip continued through the “revamped” section at Wednesbury, sadly here, every towpath light, fixture and fitting has been wrecked and there’s graffiti everywhere.

Ryders Green locks are neat and tidy and we thought well kept, everything was fine until we grounded under Asda’s footbridge, we were on a very solid object and we stayed that way for some hour or so, much flushing down the flight eventually freed the boat.

Leaving the top of the flight we proceeded through Greets Green to Pudding Green Jcn encountering on the way much debris and more weedhatch requirements, even on the main line we picked up badly just before Smethwick stop, in that case very thick wire requiring a hacksaw!

So what is a summary of the Walsall? It is a deep canal, however the debris and rubbish is the severe problem. There also seems to be a strong antisocial attitude to the navigation in the Pleck area of Walsall. Is there much to see today? To be frank, very little, the canal doesn’t have much to offer at all other than a through route. Spinks Bridge is a serious hazard and I would advise any deep drafted boat to be very aware of this location.

If Walsall basin is to be the new “Brindley Place” then its approaches need serious consideration as to the attitude of the local population, the same should be said for Sandwell’s section too, this IS a neglected and overlooked asset.

Sunday 30th May, CanalScape quick cruise round the city! Amazed to see a new resteraunt on the Oozels st loop, looking very inviting but with NO moorings!! Is this progress?
Posted by Barnet at 20:13 8 comments:

New You Tube Edit from Laurence

Please rate the video!
Posted by Barnet at 20:41 No comments: 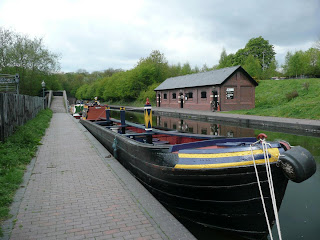 Tug gathering at Black Country living Museum. Barnet attended the tug gathering this weekend, during the 1970's 109 spent several years as a carrying tug working with a station boat on dredging (see picture). She carried the much disputed very dark blue and gold livery. Today we welcomed Sophie and Mark Pullinger abroad for a run on the old main line. 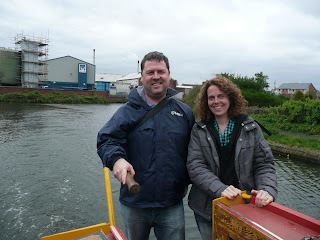 Laurence and Mark worked together for a few years during Boatmans Cabin Ltd existence at Iver Bucks, Mrak has shot to fame as the man who last year has rediscovered the Harefield boat graveyard, he together with Laurence are piecing the story and remants of this place together assisted by BW and TWT. 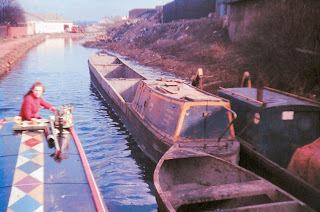 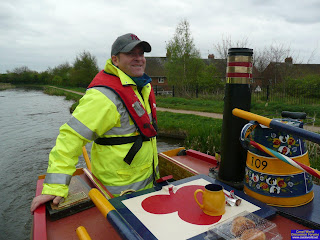 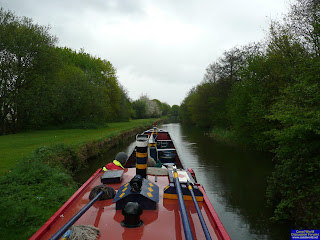 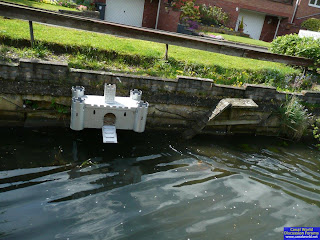 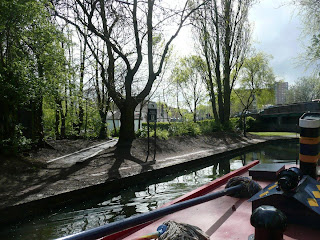 Canalscape_BCN first cruise for 2010 was from Norton Canes Docks on the Cannock Extension Canal to Broad St depot in Wolverhampton. Crewing with us was Dean Davies local BW waterway manager.
The journey was completed in 4.25 hours. We also nosed into the cleared Holly Bank basin and stopped off at the United Kingdom mooring at Lane Head.
British Waterways spot dredging, tree cutting and weed eradication has transformed the Wyrley & Essington, Barnet was drawing 3ft 3” today underway and we had no need to go down the weedhatch even once!
The W&E is a fully useable waterway without any of the former problems so often reported. Along the route there is a number of good pubs, good overnight moorings at Lane Head and the a suprising lack of boats! We saw not one other boat moving.
There is no reason for any boater to worry about navigating this stretch of canal now, it is in better condition than some more well used canals.
Hollybank basin is superb and surely must be a candidate for become a marina or moorings, there are also many other sites which could well become moorings with a little foresight.
Hollybank is once again an inviting rally site. 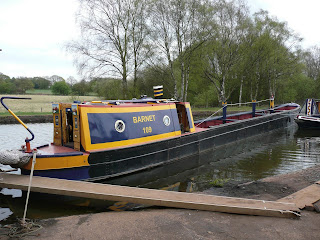 After the serious winter which saw 109 firmly iced up maintenance has been carried out to ready the boat for duties this year, A little later than expected start to her season due to unforeseen difficulties arising which reduced the crewing availability. We intend to add more ballast this year and one of the first runs will be the Wyrley and Essington to Wolverhampton to see what impact the BW dredging and clearing has had. Attendance of local events is expected and we will continue to use the lesser navigated parts of the BCN.
Below: Two Grand Union Town Class Narrowboats together, Barnet alongside Large Northwith "Thaxted". 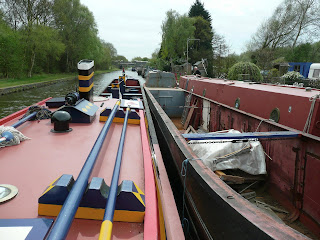 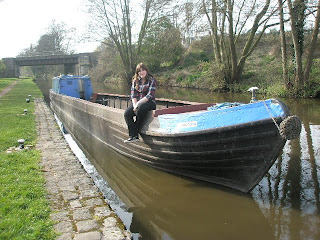 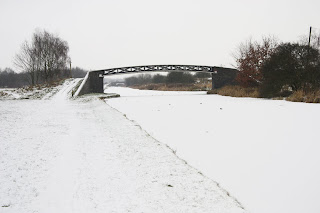 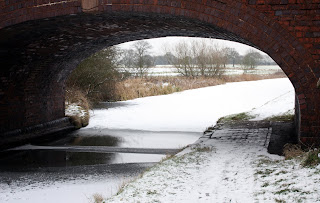 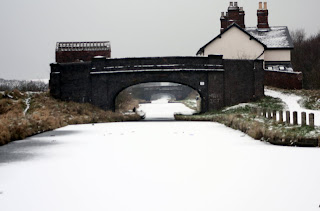 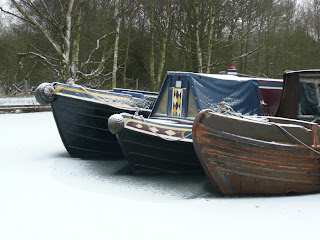 Lets go boating on boxing day, err no, "cuts froze", New Years day....err no, cuts froze!. The cut is solid at Norton Canes and "Barnet" isnt going anywhere. So today was just a day to fire up the engine, make sure the batteries are up and warm up the cabin, with the range. The canal is quite exposed at the dock and despite "avving a go" I couldnt break the ice with the shaft.
Posted by Barnet at 19:53 No comments: